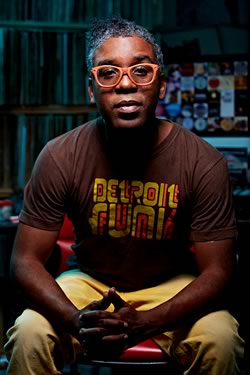 Perhaps it’s a combination of his Haitian roots, his youth spent in St. Croix, and his New York City upbringing. It is evident when he steps behind the turntables or CDJs, where he is at once clearly comfortable and believe it or not, just a tad bit nervous. After more than 20 years in the business, yes, “The Kaizer” still gets butterflies. That’s probably what makes Kai Alce (pronounced al-SAY) such a force: He doesn’t settle down, blend in or go along. That integrity comes through in every gig he’s worked – from his early days at Detroit’s Music Institute when he was just teenager, to the 10-year-long DEEP legacy at MJQ that he co-founded, to the production company, NDATL, that he created in 2008.

With his mother’s soca and his father’s jazz providing the soundtrack to Alce’s youth, hip-hop would open the next chapter of his musical education. These were the formative years for the genre – think Kurtis Blow – and the genesis of Alce’s sense of musical independence. But as a child of the ‘70s, there was no way to escape the groove-laden, vocally harmonic and musically lush sounds of disco. This would become part of the basis for Alce’s track selections and productions to come. He moved to Detroit in 1980, landing a job at the Music Institute in 1987 that gave him access to such would-be house luminaries as Derrick May, Kevin Saunderson, D. Wynn, Alton Miller and his cousin Chez Damier. Already tuned in to the sound, Alce couldn’t help but be inspired as the Institute became critical to the development of techno and house, with the studios churning out classics such as Inner City’s “Goodlife” and Rhythim Is Rhythim’s “It Is What It Is.” Next stop: Atlanta.

While Alce’s formal education would advance with a degree in psychology from Morehouse College, he’d be schooling the city about house music. Simply put, his importance to Atlanta’s international renown as a city that holds down the house can’t be overstated. He first took to the decks at Club Velvet, but would move on to play at every venue that welcomed (or was warming up to) house, including Traxx, Kaya, 688 Madhouse, Oxygen, Nomenclature Museum, Ying Yang Music Café (home to then-nascent artists such as India.Arie and Donnie), and culminat-ing with his weekly residency at MJQ. DEEP at MJQ was instrumental in bringing Atlanta’s house scene international attention. Along with Alce and co-residents DJ Kemit and Cullen Cole, DEEP hosted DJs such as Chicago’s Steve “Silk” Hurley, the U.K.’s Phil Asher, NYC’s Joe Claussell, Atlanta native Tedd Patterson, the Windy City’s Peven Everett and Philly’s King Britt, just to name six of hundreds of top-notch DJs that played over the years.

From DEEP, Alce jumped into Deep Detroit House Sessions in 1997 aiming to strengthen the link between the South and the Motor City by welcoming guests such as Damier, Alton Miller, Brett Dancer, Moodymann, Mike Huckaby and Theo Parrish to lofts and venues that were willing to harbor the late-night antics. In 2002, Kai Alce’s journey as a recording artist began with his first commercial release on the seminal label Track Mode. The Kaizer EP was warmly received by worldwide audiences. Since then, Kai has released music on Detroit staple labels Mahogani Music (Moodyman’s label), FXHE (Omar S) & Real Soon (UK) and Deep Explorer Recordings.

In 2008, Alce’s own imprint, N.D.ATL Muzik, was born. N.D.ATL is an acronym for New York, Detroit and Atlanta, the three places that have cultivated the sounds and tones of the label’s releases. N.D.ATL Muzik projects include The Floating EP, which received critical acclaim from DJs around the world. The second single, Power Through Part 3, the vocal continuation of Power Thru Pt 1 which was originally released on his first EP. Finding its release in 2008, the single was charted by various DJs around the world, included on Steve Bug’s compilation for NRK and Cassy’s In The Mix compilation for Cocoon Recordings. N.D.ATL Muzik also started a three-part 12” series in tribute to the legendary Music Institute, in which he calls on all of his mentors and peers from Detroit who were part of the Music Institute scene. Projects with collaborators such as Jovonn, Alton Miller, Chez Damier, Phil Asher, Roland Clark, Azulu Phantom, Omar S have also proven Kai’s vast textures & sounds. So plan on future N.D.ATL Muzik releases to leave their indelible mark on this thing we call house.

Alce’s got his work cut out for him, whether it’s his own production or work for others – such as a remix of Anthony David’s “4EverMore,” or Roland Clark’s “Sparrow” – or releasing the work of artists such as Jovonn, Phil Asher, Roland Clark, Azulu Phantom, Omar S, Abacus, Damon Lamar, Brett Dancer and KemeticJust on the NDATL label.

Keeping his connection to Detroit strong, Alce now heads up the most highly anticipated house party at the Detroit Electronic Music Fest, beginning in 2008 & now celebrating it’s 6 year in 2014. And his cultivation of the Atlanta scene continues with the Distinctive monthly at the Sound Table. What’s good is that, just like always, Alce is ready to put in work – staying true to house music, DJing for DJing’s sake, pushing himself … and us on the dancefloor.

Whether it’s after a night of intense dancing at the club, a session in the booth or studio, or any other creative endeavor, as long as it’s done with truth and sincerity.